*This post is a review of the Zen Sack sleep sack, however, I do mention use of the swaddle as well.

If you have a new baby, one of your biggest challenges is probably sleep. Oh boy, was it a challenge for me! As a newborn, the only place Cassidy wanted to sleep was on my chest. Which was really sweet and cute, but I needed to sleep too!

Her bassinet was next to the bed, and it had a sound machine attached to it and a gentle vibration that is supposed to help soothe babies. Whenever she would fall asleep on me, I would gently move her to the bassinet and cross my fingers that she stays asleep. If she didn’t wake up immediately, she would only sleep for about 40 minutes to an hour.

I had tried swaddling, but she would just break out when I did it. My doula did it once, and she slept really well the entire time my doula was visiting. But anytime I tried, I couldn’t get it tight enough for her to stay in it. I was getting so frustrated, and the sleep deprivation was really taking a toll on my sanity.

After speaking with my doula about our struggles, she offered to bring over a special swaddle we could try. The Nested Bean Zen Swaddle. When she said it used velcro, I was intrigued. It must be easier than trying to wrap her myself.

It looked really confusing but it was actually very easy to use. The weights that sat on her chest and at her sides seemed to really comfort her. We began to settle into a good routine where I would feed her, allow her to fall asleep on me, and then lay her down onto the swaddle and wrap her up. If she woke up, I would hold her up to me again until she fell asleep. Then I would gently place her in the bassinet. With this swaddle on, she would sleep for anywhere between 2-4 hours. It was a miracle! As time went on, she was only waking up once or twice during the night.

She eventually started outgrowing the swaddle and really wanted her arms out, so we decided it was time to buy the Zen Sack and see if it works as well as the Zen Swaddle. We ordered the Classic Cotton sacks, one sized 3-6 months, and another sized 6-12 months. Here are my thoughts!

The packaging was really cute. There was a little window to show the weighted chick design on the front. It came with a small pamphlet inside with sleep tips, and the box has great information about the product on it.

I mean, just look at how cute these things are! The weighted part on the front is designed to look like an adorable little chick. This same design is on all of their products which makes it very easy to recognize their brand. And they also offer different prints/colours. Because I want to use these again if we have another baby, I decided to choose gender-neutral prints. We went with “Stardust Grey” and “This Way N That Way”

Amazingly! Just like the swaddle, she was able to calm down and stay calm in the Zen Sack. Since we started using Nested Bean products, the only time we had a hard time getting her to sleep at night was during the 4 month sleep regression. But I think you would need some legit magic to get good sleep during that! Cassidy is 7 months old now, going through another bit of sleep regression, but we are surviving this one quite well, and her Zen Sack has been very helpful. She definitely sleeps better the nights she is wearing it, versus her other sleep sacks. But in general, I think because we have a good, bedtime routine/habit that the Zen Sack helped establish, she sleeps very well.

I highly recommend the Nested Bean Zen sack to anyone with a baby that is having a hard time sleeping. Even if you’re not having a hard time with sleep, they are still very cute, and the weighted piece in the front will still be very comforting to your baby.

*This post was not sponsored or endorsed by Nested Bean. I just wanted to share my personal thoughts on the product 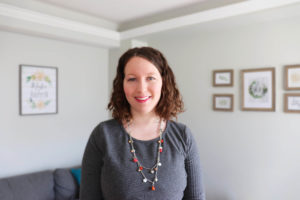